Assam State AIDS Control Society and Assam State Blood Transfusion Council observed National Voluntary Blood Donation Day (NVBDD) on October 1, 2016 at the conference hall of State Institute of Health & Family Welfare, Khanapara, Guwahati. This year, the theme of NVBDD is ‘Donate blood, it’s about life’. Welcoming the participants in the meeting, ASACS Project Director, Manvendra Pratap Singh, IAS, said, “To ensure safe blood availability , voluntary blood donation needs to increase up to 100 per cent of total blood units collected through awareness amongst donors.” He also indicated that Assam is far behind in increasing awareness among the people. Therefore, the percentage of VBD in Assam is 57 per cent in comparison to other Northeastern states where it is 100 per cent in Arunachal Pradesh and 97 per cent in Tripura, he said.

Explaining the significance of the day, Deputy Director, Blood Transfusion Services, ASACS, Dr PK Barooah said, “Voluntary blood donation is possible if a person is self motivated to donate blood for which awareness and knowledge are required.” He further said, “The existing physical structure including transfusion equipment of the blood banks will be upgraded.” He also explained the grassroot level techniques to motivate blood donors.

Commissioner to the Govt of Assam, Dept of Health & Family Welfare, Samir Kr Sinha,IAS, said, “ We know the price of blood when we require the same. So, all the voluntary organizations must come forward to donate blood. This initiative needs public support, otherwise it will fail,” adding, “Every voluntary donor must be projected as a hero. Voluntary blood donation must not be confined to the urban areas only. It should be a social movement. There must be a common platform for all agencies, a roadmap and a design and a designated task for everyone.”

Principal of Guwahati Medical College Hospital, Dr AK Adhikari stressed on newer technologies which should be available in future like pathogenfree blood and blood products for the needy patients. Director of Health Services, Govt of Assam, Dr Ratin Bhuyan also stressed on the necessity to increase the voluntary blood donation for which focus must be on peripheries. Deputy General Manager, Luminous Infoways Pvt Ltd, Tapan Kr Bhol, who is developing the e-Blood Banking system for Blood Transfusion Services, said that with the introduction of the e-Blood Banking system, the general public will be able to locate blood banks along with the availability of blood.

Along with the rest of the world, Assam State AIDS Control Society (ASACS) observed World AIDS Day on the December 1, 2016 at Sri Sri Madhabdev International Auditorium Kalakshetra, Guwahati. The daylong event began with a rally that was flagged off by Mount Everest climber Henry David Teron at ASACS premises which culminated at Kalakshetra. Welcoming the huge gathering at Kalakshetra, Project Director Manvendra Pratap Singh, IAS, said, “There is no contradiction of the fact that HIV/AIDS menace has been affecting and infecting millions across globe. If we go by the UN AIDS report, at the end of 2015, where are 36.7 million people living with HIV around the globe and 1.1 million people died of AIDS-related illness during 2015.” Stressing on this year’s theme – Hands up for # HIV Prevention-, Singh said, “We should raise our hands to raise issues related to HIV/AIDS. In this age of social media revolution, we can start talking about HIV/AIDS openly and let us try to spread ample awareness and end discrimination against people living with HIV.”

Singh also spoke on the merits of the e-Blood Banking system was formally inaugurated by the Minister of Health & Family Welfare Dr Himanta Biswa Sarma.

Speaking on the occasion as chief guest, Minister for Health & Family Welfare, Dr Himanta Biswa Sarma said, “HIV/AIDS awareness must be taken to the semi-urban and slum areas where the awareness level is comparatively low. All teenagers should know about HIV/AIDS.” He also stressed on mouth to mouth publicity which is more powerful than any other medium of communication. He proposed that from next year onwards World AIDS Day should be observed in all colleges of Assam and open discussion about HIV preventions may be initiated with the help of resource persons selected from the teaching staff of the college. Minister further said that two more HIV/AIDS orphanages may be established in Silchar and Dibrugarh for the children of People Living with HIV/AIDS (PLHIVs).

On introduction e-Blood Banking system, the Minister lauded the efforts of ASACS which will be helpful in tracking of professional blood donors. The Minister stressed that buying NAAT machines and implementing NAAT testing will involve huge costs and moreover it will not cover the entire state. Therefore, if we increase the blood donation and have a pool of healthy donors, then the possibility of getting infected blood will be reduced. Therefore, the Voluntary Blood Donation Programme will be strengthened to fight the menace of infection through blood transfusion. He also outlined the need of donor appreciation and creation of donor-friendly environment in the state.

Samir Sinha, IAS, Commissioner & Secretary to the Govt of Assam, Department of Health & FW Department said, “ e-Blood Banking is a noble step taken by ASACS and this step will bring synergy amongst all health institutions of the state.” He also outlined the achievements of ASACS in the last few months

Deputy General Manager of Luminous Infoways Pvt. Ltd, Tapan Kumar Bhol, who developed e-Blood Banking software, gave a technical overview of e-Blood Banking System. Officer in-charge CST,ASACS, Dr PD Barooah spoke on the various activities carried out by ASACS since its inception. Deputy Commandant, CRPF Ravindra was also present on the occasion. Several best performing ASACS officials who are working in the periphery were felicitated in the function. Three best performing Red Ribbon Clubs were awarded in the event. Ex-gratia of Rs 1 lakh was given to 41 widows of People Living with HIV/AIDS (PLHIV).

An IPC (Inter-Personal Communication) Health Camp was organized for truckers and migrants at BG Godown, Noonmati Guwahati on August 13, 2016. The camp was organized by Assam State AIDS Control Society(ASACS) with the help from TI NGOs - Social Unity Keeper Association For All (SUKAFA) and Nalbari Bah-Bet Silpa Unnayan Samity (NZBBSUS). The camp began at 10 am where a team of doctors, nurses, pharmacist provided by the Office of the Joint Director, Health Services, Kamrup (M) were engaged. The ICTC Mobile Van was also deployed at the site. The health check-up camp offered- health check-up of the beneficiaries, HIV/AIDS counseling and testing and distribution of medicines. A total of 162 beneficiaries we were registered and a total of 64 nos of clients were tested for HIV/AIDS. None of them were tested positive. The camp concluded successfully at 4 pm. 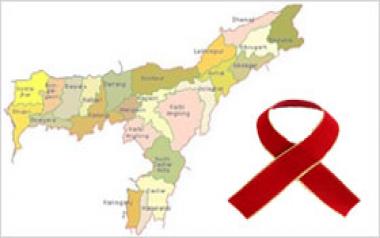